Please note: Current order processing times are 1-2 weeks due to the large volume of orders over Black Friday. Thank you for your patience!

Inflate, Deflate, and Equalize air pressure in all 4 tires, all at once. See all of the uses below:

– Air up 1 to 4 tires simultaneously (Less stress on your compressor!)
– Air down 1 to 4 tires simultaneously (Less stress on you!)
– Check all of the tires’ PSI from the manifold (No more continuously bending over checking PSIs)
– Move air from a spare tire into other tires
– Effortlessly equalize tire pressures
– Make all 4 tires the same pressure
– Run different PSI in the front tires from the back tires
– This version fits up to a 125″ wheelbase with the air source in the middle of the front or rear bumper areas, or in the center of the side of the vehicle (under seat mounted compressors).
– If you need a longer wheelbase, check out the MORRFlate Quad+ Off Road 4 Tire Inflation Deflation Kit
– If your air source is in a different location, check out our MORRFlate Extensions
– All MORRFlates fit ARB compressors and PowerTanks “plug n play” If you have a Smittybilt, Viaire, Warn Powerplant, or something modeled after those, check out our MORRFlate Adapter Kits.
– Don’t forget your MORRFlate Digital Gauge with your order, so you can set precise and accurate tire PSIs, unlike dial gauges.
– Read the entire MORRFlate Off Road 4 Tire Inflation Deflation Kit article for more detailed information!

Since this video we have upgraded the carrying bag that comes with your MORRFlate! It now looks like this! 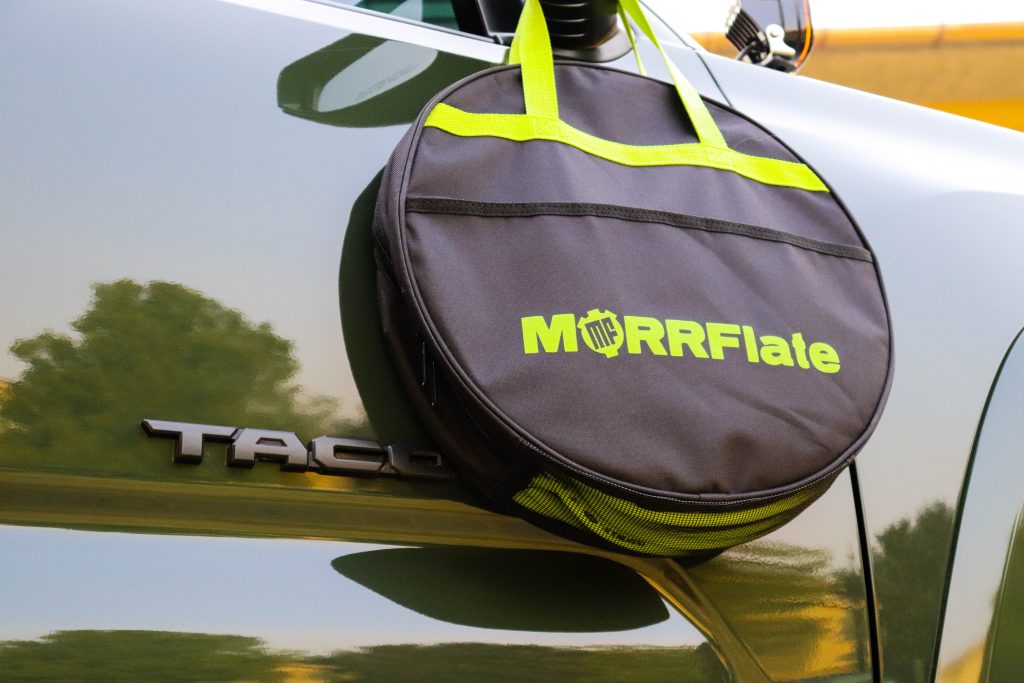 Inflate, Deflate, and Equalize up to 4 tires with no installation, and no prep. Just pull your MORRFlate out of its storage bag, hook it onto your tires, and grab a drink while all your friends get their squats in.

The MORRFlate is made with simplicity and durability in mind. It is rated for up to 22CFM, 140psi, -40 to 150 degrees F. It is kink and abrasion resistant, does not hold memory, and there is no installation required.

It will fit up to 125″ wheelbase vehicles (Yes that means your JKU or JLU!) with an air source in the middle of the front bumper, middle of the rear bumper, or center of either side of the vehicle (under seat mounted compressors).

If you need a longer wheelbase, check out the MORRFlate Quad+ Off Road 4 Tire Inflation Deflation Kit (up to 155″ wheelbase).

The entire MORRFlate line will work “plug n play” with any air source that uses an “IM Coupler” to connect to. This means ARB compressors and PowerTanks. If you have a Smittybilt, Viaire, Warn Powerplant, or something else modeled off of one of those, you will need to check out our MORRFlate Adapter Kits.

If your air source is in a different location, check out our MORRFlate Extensions.

Don’t forget your MORRFlate Digital Gauge with your order!

To read the complete writeup, check out our article on The MORRFlate Off Road Multi Tire Inflation Deflation Kit.

Please allow 3-5 days for order processing. Please email if you have questions! Thank you for your support and sharing with all of your friends! Explore speedily and speed safely! Dismiss